As you may know I am currently an intern at Woedend!, a communications agency in Amsterdam. I am working on a transmedia campaign with Lydia van der Spek. In order to clarify to everyone within the company exactly what we’re doing, we could give them an ordinary presentation, but we came up with something much cooler. On thursday, march 24, Lydia and I let our colleagues feel the excitement and fun that such stories can evoke through a mini transmedia experience.

During the pizza meeting, a meeting at Woedend! where everyone can show what he is doing or what he finds interesting, we put down a black box, with “Open me” on it. No one had noticed, until it was our turn to present and we suddenly vanished.

Inside the black box was a folded page of a newspaper with “Help” written on it. On the front page of the newspaper there was an article about two missing interns. “There are speculations that the police suspects an angry colleague, but chief of police Welten has not confirmed this. The two may be detained at an unknown location.” At the bottom of the box is a folded old towel with a URL written in blood. 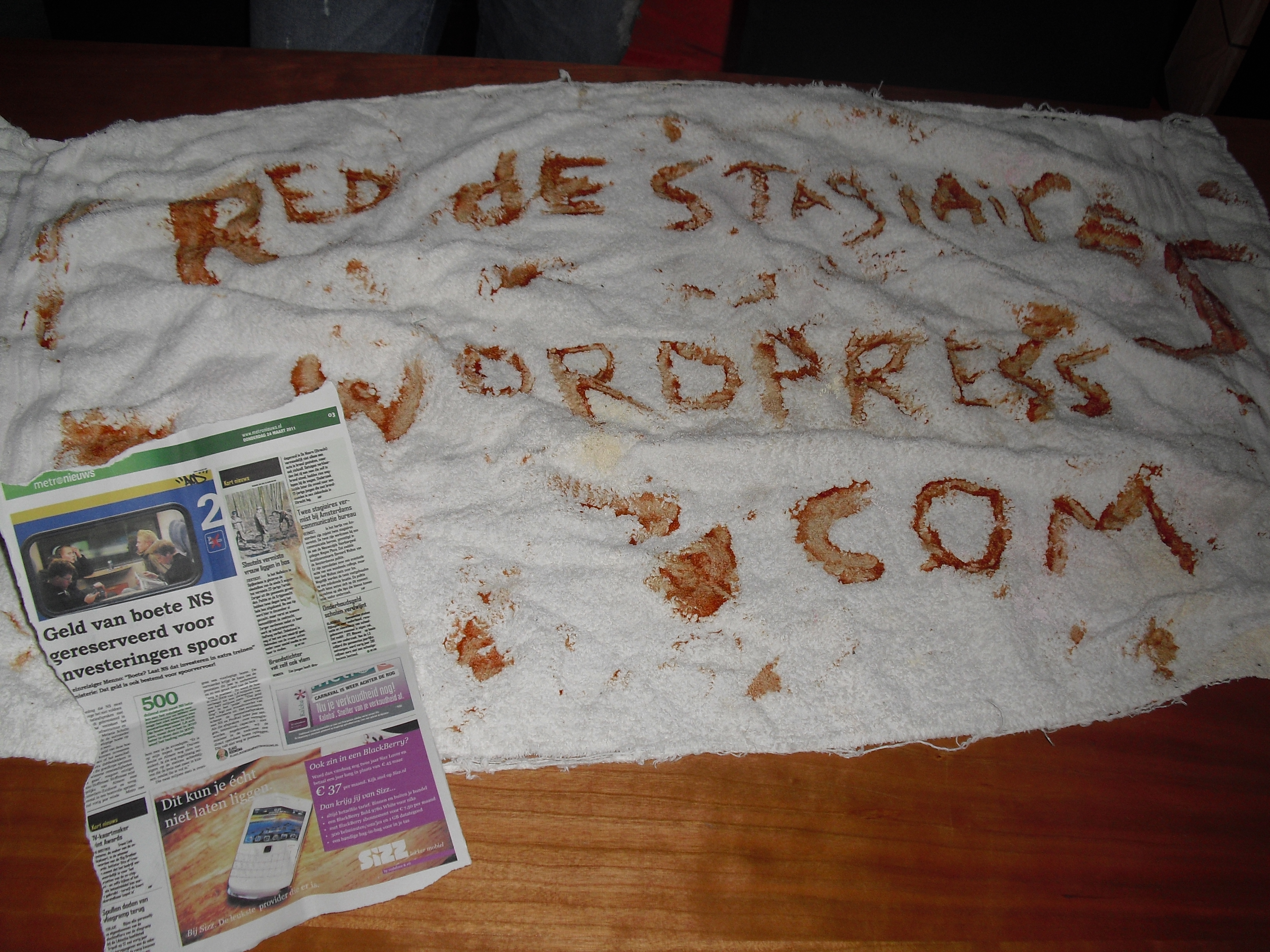 Frontpage of a newspaper and a towel with blood

On this website you can see a photo of us, the kidnapped trainees. The next clue is hidden in the text below the image. Because the red letters in the text say: youtubewoedendkidnap, therefore search woendendkidnap on youtube.

In the video on YouTube, we ask whether someone can help us. We’re locked up with a kryptonite evolution lock 2000, how can we hack it? The answer (by using a BIC pen) can be found via google and emailed to free.dydia@gmail.com.

If the answer is correct you get a response email: “We hacked the lock, but we can not open the door. We know that the offender has a hidden memory stick somewhere, perhaps it contains more information. We overheard something about “between the beams”… Make sure you search well and help us out of here, good luck …!”

Searching for the memory stick

O the memory stick there’s a document called !!!SECRET!!!, this is a Flash application in which all Woedend! employees are suspects. Who is the culprit? is the question. Clicking on the wrong photo you will get a clue, for example, when clicking on a blond person: the offender is not blond. Ultimately, only one suspect remains, but is he really the kidnapper? A movie of the culprit appears, when he takes of his hat and a scarf, they can see who it is.  It’s Remco, the former intern. He regrets his abduction and gives the code of the door. The numbers are mailed to us and we’re finally free!

Too bad we were kidnapped, because everybody said it was fun to join this tiny adventure! We got lots of positive reactions and the photo’s speak for themselves!

We want to give credits to our role model: the SXSW presentation A Mime is a Terrible Thing to Waste by No Mimes Media Partners Steve Peters and Maureen McHugh.

A silver spinring for Sam