In the summer of 2011 strange scenes were seen at different locations in the Netherlands. Young people disappeared and zombie-like creatures wandered through the streets of Amsterdam. Lots of questions were asked, but the most important one was: Is this really the beginning of a zombie outbreak?

Who knows… It certainly is the beginning of the transmedia sci-fi thriller SALIGIA-7. In this projects we used television, online- and social media, games, live events and alternate reality games. For three weeks, we introduced the public to different people and plots in the storyworld by creative producer Ian Ginn.

For the pilot, Hubbub media, VPRO and Woedend! brought different storylines to life. It starts with Christel Stuyt from Amsterdam who posts make-up tutorials on YouTube and shows her running tracks on Facebook. One day she takes 90 minutes longer to finish her usual run through the Vondelpark and she has no idea what happened. From that moment on, she’s feeling worse and worse, as seen in her YouTube videos and on her social media profiles. After a few days she’s looking really bad and she can even pull large pieces of skin off her face. After that Christel disappears, nobody knows where she went. And Christel is not the only missing teenager. Her mother Maria Stuyt starts a search.

Meanwhile, Max de Burgh and Jules Carillio spot some suspicious characters walking in Amsterdam. As sci-fi fans, they’re pretty good at recognizing zombies and they know that this can only mean one thing: the zombie apocalypse is coming. Since the government is not taking them seriously, Max and Jules decide to warn people themselves. They start Zombie-alarm to gather evidence and tips.

When Max and Jules go to Lowlands they think they’re at safe distance from the zombies, but that wasn’t the case. These living dead were all around the music festival. We are introduced to Amber, her boyfriend Jamiro turned into a zombie at Lowlands. On national television Max and Jules try to warn people, but no one believes them. 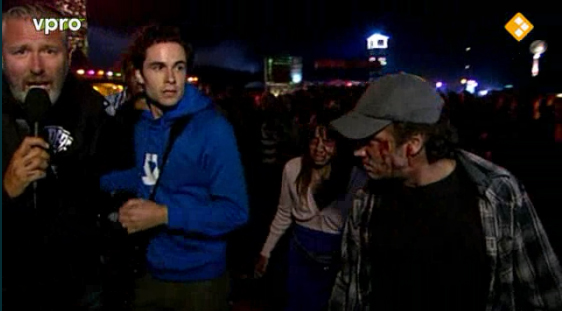 After Lowlands Christel returns back home. It’s her mother’s birthday. But not much later the confused girl leaves the house again.

Max and Jules receive an anonymous tip that they should come to the Westerpark. They ask site visitors to help them out. Once they’re in the Westerpark it becomes clear why they needed to come. Behind one of the buildings there’s a hideout with a group of zombies in it, including Christel. When Max and Jules try to get closer to the evidence, two vans with agents are driving up the Westerpark. The agents are with the ISB (Interventionteam Special Securitymissions) and they brutally take the zombies with them. Then an investigator needs to do his job by collecting evidence from the scene. He secretly hands over cards to players. It leads them to the Z-leaks website, where ISB documents are leaked. 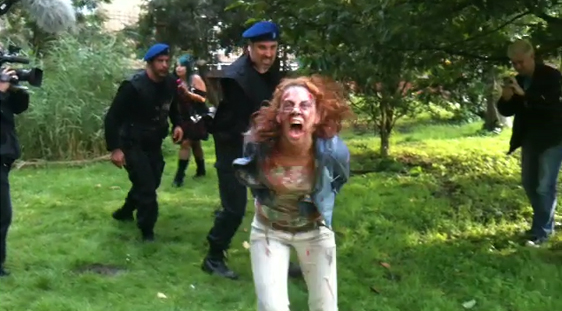 The talkshow Take 10 pays attention to the growing zombie problem. Clairy Polak leads the discussion. Maria Stuyt thinks her daughter is treated like an animal and demands an explanation. Jules also wants more clarity. The Dutch people have the right to know what is going on. Herman van Stompetoren, ISB spokesman, denies the whole incident.

On Z-leaks a new action is announced. This time it will happen at the Noordermarkt. The ISB takes a group of zombies, but apparently they are too late. The zombies already caught a man and the loud grunting creatures are tearing the flesh of his body. One ISB’ers is fed up with the whispers between the investigator and Max. After a fight he takes them both into his car. The action gets attention of local and national television.

In an intense second episode of Take 10 epidemiological advisor Tom Finkers is calming down to the audience. During the broadcast Z-leaks is hacked and replaced with a threatening video of  the ISB’er that took Max and the researcher. He has released Max, but the researcher is not so fortunate. It is clear that the ISB’er doesn’t let anyone push him around. Max and Jules decide to go hiding, but the danger is not over…

There are lots of things in SALIGIA-7 that we are proud of, but there is also a lot that we could have done better. I wrote down the 3 most important strengths and weaknesses.

Three things that were good about this project:

Three thing that we will do better next time:

A lot has happened during the first 3 weeks of the story, and this is only the beginning of the SALIGIA-7 adventure. It is way bigger than you would expect. Questions that remain are: Why are kids the only ones getting infected? Where did the ISB bring the zombies? And are they still ‘alive’? Maybe you’ll find out one day… Stay tuned and stay alive!